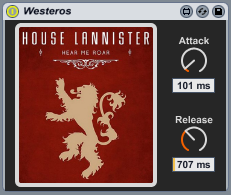 This is an instrument for users of M4L and fans of Game of Thrones. It is essentially a sample pack of animal sounds that you select by scrolling through a few sigils of Westeros. I’ll make a standalone application soon for anyone who doesn’t use M4L.

Each oscillator can play one of the four classic shapes (sine, saw, square, triangle). “Mod 1″ and “Mod 2″ can run at frequencies that are quantized to the Ableton session. This patch is conceptually simple, but can make some sweet sounds and for some reason, I’ve never seen a plugin that does what this patch does.

This is an mp3 of a track that I made shortly after releasing “Let’s be Friends”. It’s a glitchy, industrial, breakcore kinda thang that I made while listening to a bunch of Xanopticon and Venetian Snares. I dig the track, but it sounds so unlike my current music that I can’t imagine releasing it with any other tracks. Please fill out the form at the top of the page if you’d like me to send you an uncompressed file.
Accidental Disturbance by preshishmoments